Insufficient attention to localization engineering may lead to unnecessary or duplicate activities in the process, delays, increased costs, or products with defects that could have been easily avoided.

EUITSols has one of the localization industry’s strongest engineering groups- the team is comprised of permanent staff members and is augmented by a stable group of contractors and partners at peak production times. Our engineers are part of the localization team and are assigned to in-house projects based on skill sets and project requirements. They carry out all non-linguistic tasks – from writing test plans, building, testing, fixing and re-engineering of translated software, to building gold masters for delivery to our clients. 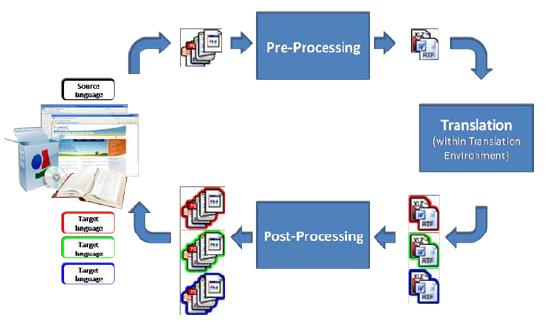 With sales in your home market inevitably reaching – sooner or later – their growth limits, marketing your products to international markets is an attractive option. This opens new roads to increasing your revenues, and brings the much-sought economies of scale.

Whether it is a large global company or a smaller fast-growing company, translation of a website, document or even a software has become imperative to continue to yield high returns in terms of revenue.

Our expertise lies in the translation of European and Indic languages – i.e. languages spoken and used in the Indian sub continent. However, for a full and comprehensive list of languages for which you may require translation, please contact us by phone or by email.

Functional testing helps to find defects early in the overall product development process. Integration testing can be included, which will assess how well different components of the product function together after they have been tested individually.

The functionality testing service we provide are:
Pairwise Testing
A technique designed to analyze each test case in order to arrive at the optimal number of discrete combinations to cover everything that is needed, while at the same time minimizing the effort and cost of such testing.

Acceptance Testing
This is the formal type testing which considers user needs, requirements and business processes, and is conducted to determine whether a system satisfies the acceptance criteria. It enables the users, customers or other authorized entity to decide whether or not to accept the system. The purpose is to evaluate with authority the system’s adherence to the requirements.

Use Case Testing
It is a technique in which test cases are designed to execute user scenarios. The purpose of this testing technique is to do what a user would do. This testing aims to assess the tested product in a real-world environment from the user perspective. Rather than always working with a detailed set of test cases, users/testers test the product using more broadly defined scenarios.

While ad-hoc testing – one extreme case of user scenario testing – is typically “exploratory” and random, and completed only once (unless a specific defect is found), use case testing is typically a more continuous “start-to-finish” approach. The purpose of this testing is to help uncover functionality issues which might not be immediately obvious to the product developers, or to assess the product’s functionality as perceived by end users/customers.

For some software developers, use case testing is considered a crucial and critical part of their overall testing approach, while others prefer to focus on other types of testing that verify the product’s functionality in real-world scenarios.

Stress Testing
The objective of this type of testing is to evaluate a product or its component and how it behaves at or beyond the limits of its anticipated or specified workloads, or with reduced availability of resources such as access to memory or servers. The purpose is to test how the product behaves under limited resources.

Load Testing
Performed in an emulated real-world environment, the purpose of this testing type is to assess the product’s functionality under certain “pressure” conditions (such as a networked product with 100, 1,000, or 10,000 active users), and to determine how well the product meets desired performance goals.

Compatibility and Interoperability Testing
These testing solutions are designed to verify that products will function as expected on a wide variety of hardware, software, and network configurations. Testing is performed on a specific combination of platforms or operating systems, running on defined set of hardware configurations. Compatibility testing can also be performed to assess the backward compatibility of the current version with previous legacy versions of the product, or its cooperation with other related software products.

Ready to work with us? Get Started

Hi, How can I help you?
Scan the code